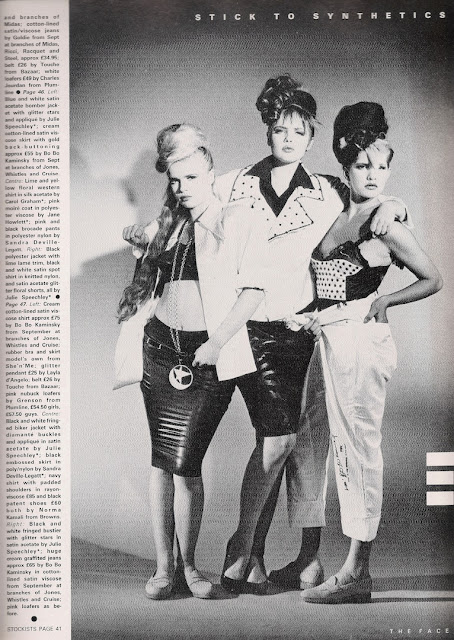 Here's my first post from the depths of my collection of Face magazines.  The Face started in the UK of course, in 1980 in response to the New Romantic movement which was emerging at the time.  Its focus was on aesthetics in fashion and in music and was a very stylish publication (although in my opinion it did degenerate in the 90's - I guess as music itself degenerated!)

The first two images are stunning - I mean with Mario Testino as photographer, what else can one expect really, plus Nostalgia of Mud clothing by Dame Viv and Malcolm McLaren!

The next two images feature a fixture in the London scene at the time by the name of Lizzie Tear.  She is the one to the very left in the last image with the big beehive.  She worked in Vivienne Westwood and Malcolm McLaren's shop 'World's End' for a time, and later on in 1987 produced a single 'Life Won't Be The Same'.  She was also almost in Malcolm McLaren's band Bow Wow Wow ... ahh well, t'wasn't to be, and we ended up having the fab Annabella Lwin instead!
Posted by Maryanne at 1:06 AM